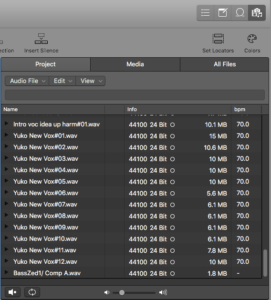 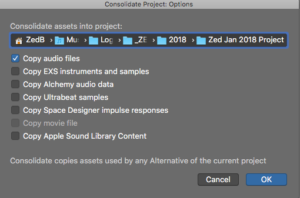 Automatic Region Gain for the People!

As is typical with many of Logic’s updates, most of it seems to be bug-fixes and some minor aesthetic tweaks, along with a small handful of cool new glamorous items and enhancements.

One of the coolest updates in this release was actually buried towards the end of the list of new features. It’s these humble (and not at all obvious) new key commands:

Translation: You can use these key commands to change the region gain of a selection of audio regions, and you can either max out each selected region (Normalize Individually), or average out the gains between those regions that are selected (Normalize All).

Despite the eye-glazing name, this is pretty big!

A handy trick when working with audio takes, especially vocals, is to go through and tweak  the gain of vocal phrases using the Region Gain so they are more consistent throughout the track in regards to each other and also to hit compressors in the channel strip a bit more consistently.

I normally cut up the vocal track into phrases (usually with Strip Silence to start with) and then quickly go through each region one-by-one manually tweaking the region gain in the Region Inspector for each phrase (and tidying up breaths etc at the same time). It’s not as bad as it sounds – might be 5-10 mins to do an entire vocal track.

But now you can simply select your vocal track, cut the phrases out with “Strip Silence”, select them all, then use the key command “Non-destructive Region Normalize” to level-out the whole batch at once. You’ll still need to tweak a couple of regions – start and ends can be a bit rough using “Strip Silence” – and any breaths that were selected by themselves will be really loud.

By the way – the key commands are currently unnasugned to anything – I used Ctrl-Option N and Ctrl-Option-Command N for mine.

It’s not an accident that the “Smart Tool” mode in Pro Tools is so popular and efficient. Smart Tool mode is where the Pointer tool automatically changes to various different tools depending on where you position the mouse on an audio or MIDI region (Left: top, middle, bottom, Right: top, middle or bottom, or bang in the middle of a region). Logic can automatically select between Grabber, Trim, Loop, Fade and Marquee tools. Not having to manually change tools speeds things up a lot, especially during editing.

Here’s a way to set up Logic Pro X in a similar way to Pro Tools to gain the benefit of way less tool changes and a more intuitive operation, which should speed up your workflow.

First, set Logic up so it allows three tools instead of two by going to and setting the following Logic Pro X preferences:

Then in the same preference pane add the automatic assignment of Pointer to the Fade tool when hovering over top left and right of audio regions.

I used to also set the Marquee tool click zones option, but have now stopped doing this – see the text below the video for a brief explanation why.

I now set my three tools (at the top of the Main Window) to Pointer, Pencil and Marquee. (Left Mouse, Command-Mouse, Right Mouse).

I recommend spending some time learning how to use the Marquee Tool – it’s the equivalent of the Select Tool in Pro Tools and is incredibly powerful once you get your head around it.

Check out my video on the Marquee tool here:

Note that in this video I have “Marquee Tool Click Zones” selected in Logic’s General/Editing preferences (which means Logic Pro automagically switches to the Marquee tool when in the lower third of a MIDI or audio region). To be honest this is very finicky to use when you’re not fully zoomed-in, and can also be prone to accidental selection weirdness happening unless you are. Plus, Apple have recently changed how automation points are selected and edited with the mouse that makes it easier to just have Marquee tool on the right mouse button instead, so I recommend just doing it this way.

Bonus Pro Tools Operation Tip: Open (and enlarge) a Mixer Window (Cmd 2), then you can toggle between them just like in Pro Tools with Cmd = or Cmd ~